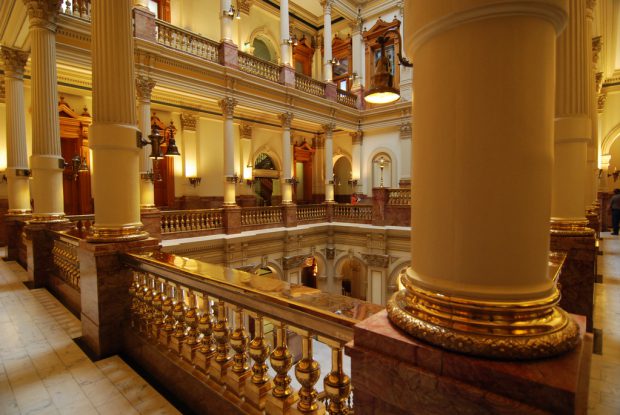 Legislative Update: An Uncertain Path Ahead

Colorado’s legislature temporarily adjourned on March 14, well before the clock ran out on the 120 days legislators have to work with. This shutdown, of course, was due to COVID-19, a virus that has altered nearly every aspect of life around the globe. The medical reasons to shut down were clear. But the outlook on reopening is still hazy.

The Colorado Supreme Court cleared up some confusion earlier this month. It ruled that, because the adjournment occurred under a rule of procedure that allows for increased flexibility during disease-related emergencies, the legislature’s countdown clock would be paused, resuming when they return, instead of continuing to tick down while they are away.

Whenever lawmakers do return, they will face a list of questions with no easy answers.

This ruling gives the legislature additional time to do their work—if the court had decided the legislative clock would continue ticking, session would end on May 6. But the additional time granted to legislators does not necessarily offset the scope of the challenge ahead.

The legislature has a plan to address a few high priority items. For example, the Joint Budget Committee is scheduled to meet on May 12 to hear an updated economic forecast presented by the Governor’s Office of State Planning & Budgeting and Legislative Council Staff. Other high-priority legislation includes the School Finance Act and reviewing sunset legislation, not to mention any additional legislation required to address the pandemic.

While the legislature has mapped out the first steps forward, nobody knows where, how, or when this year’s legislative session will end. The legislature might reconvene to pass a budget, temporarily adjourn again, and reconvene later in the year. They might consider rules to do their work remotely.

To what extent legislators address bills that were introduced as of March 14 is another unknown. This includes addressing bills that would modify the status of firefighters in PERA and change working-after-retirement rules for PERA retirees employed by a board of cooperative services.

Passing a budget will be a daunting challenge. The six lawmakers on the Joint Budget Committee, who were allocating dollars amid a bustling Colorado economy in January, now find themselves facing a significant shortfall.

“Before the emergence of COVID-19, the JBC was working with an increase in funding of more than $500 million over last year,” said Michael Steppat, Colorado PERA’s Public and Government Affairs Manager. “Now they face a shortfall that could approach $3 billion. Plus, they have a little more than a month to revisit every single spending decision they have made whereas the normal budgeting process typically takes months.”

The manner in which PERA’s funding is part of the budgeting process is nuanced. Members and employers send PERA contributions based on a percentage of pay. The state budgeting process sets pay rates and employment levels for state employees—a legislative task separate from setting the contribution rates—while school districts and local governments determine pay and employment levels for their employees. As part of SB 18-200, the legislature also created the Direct Distribution, in which an amount, currently $225 million each fiscal year, is sent to PERA, although this component is not appropriated by the Joint Budget Committee.

Federal Funds and the State’s Budget

Over the past two months, the U.S. Congress has passed a number of bills that provide economic relief to individuals, businesses, and also funds for governments at the state, territorial, local, and tribal level. To date, the aid provided by all “phases” of legislation amounts to $2.7 trillion.

About $2.2 billion was allocated for Colorado, as part of the CARES Act, to be split between the state and local jurisdictions with populations exceeding 500,000. The funds do come with strings attached. According to U.S. Treasury guidelines, “expenditures must be used for actions taken to respond to the public health emergency.” In other words, the funds may not be used to offset indirect costs related to the pandemic, including “backfilling” the state budget.

PERA On The Issues will continue following this highly unusual legislative session and post updates as they occur.